Have you ever had Sugar on Snow? This northern New England treat celebrates maple syrup season. Enjoyed with donuts and pickles, sugar on snow bids winter farewell and welcomes spring. I found myself missing a trip to a sugar shack, and so I recreated sugar on snow in my city kitchen. If we can’t travel, we can cook.

Delicious and fun, if incredibly messy, this is a great activity to try with kids.

March means one thing to those of us who hail from northern New England in the US. Well, one thing if you don’t count blizzards, the Spring of Deception, mud (so much mud), and potholes.

I guess when you think about it, the blizzards, Spring of Deception, mud, and potholes also mean maple syrup, because the wildly vacillating weather creates the necessary conditions for it.

Come March, the longer, sunnier days, combined with cool nights, causes the sap to flow in sugar maple trees (I have learned today that you can get sap for maple syrup from other varieties of maple, but that it isn’t as sweet). Tap some of that sap, add wood fire in a sugar shack, and you get one of the tastiest treats on this beautiful Earth. Northern New England, along with Quebec, produce the best maple syrup (I am biased, but it’s true), and, while not my lifeblood, maple syrup certainly flows through my memories.

Heading to the sugar shack

When I was a girl, my family would bundle up in boots (always boots) and whatever necessary layers were required for that day (plus an extra warm coat, because March), and, together with family friends, drive to Windswept Maples farm, operated by the Moore family, in Loudon, New Hampshire.

After tromping around the farm, seeing the cows and other animals, we would visit the sugar shack. Now, if you have never been in a maple sugar shack, you are missing out. Smoky wood fire, and the sweet smell of sap boiling down into maple syrup is nothing short of divine. We’d get to look at buckets of sap and taste a little, and then watch it boil in the metal troughs, and then we would all pile into a large open room for the main event.

Sugar on Snow, with donuts and pickles

We got to play with our food. The most fun thing to do with that syrup was to spoon it out over snow, which would turn it into this soft, gooey candy, and then eat it.

Sugar on Snow, that delicious experiment is called. Unlike the maple syrup the region exports, I would be rather surprised if anyone who grew up outside of the region has heard of it. Have you?

I never really understood the point of the donuts and pickles, because, to me, a big ol’ bowl of sugar was the thing. I loved pickles, but not the homemade kind at the table. But the adults would eat it up. 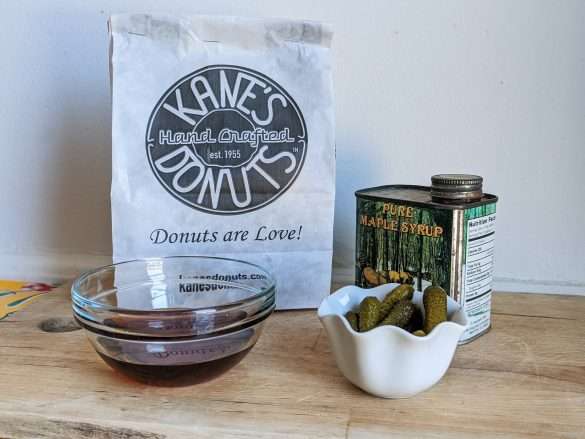 Missing sugaring season and my nephew and nieces

Walking around outside this week, I could smell spring and found myself missing sugaring season. My nephew and my youngest niece share a birthday, which was also this week, and, due to the pandemic, I missed seeing them (again. I missed last year, too). We have a “secret” Sugar Club, the meetings consisting of their Auntie Sara sneaking them sweets. With my oldest niece, I also co-chair a Pickle Society. We eat pickles. This week I really missed the kids and our culinary adventures.

I decided to try and recreate sugar on snow here at home to remember childhood and fun times with the kids. A true northern New England native, I always have real maple syrup on hand (pancake syrup is an abomination), so all I had to do was get old-fashioned donuts, which I did tout suite (homage to Quebec, that) from Kane’s Donuts.

Want recipes without all the jibber jabber? Subscribe today and receive access to the Wonder & Sundry Recipe Box. Every recipe from the blog, along with bonus recipes, just for you! 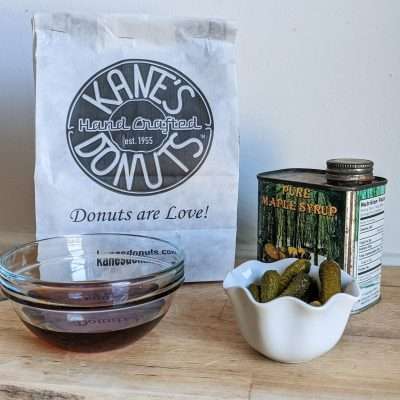 To recreate this childhood memory, I did not use snow, because a) we do not have snow anymore (hurrah for living slightly further south!), and b) ew gross. City snow is not what you want for this delectable treat.Instead, I used crushed ice. While not as romantic as making candy on a bed of snow in a farm kitchen, it worked. I got ooey, gooey, delicious maple syrup glory. I can tell you that you’ll want those pickles and donuts.Essentially what you’re doing is heating maple syrup to the very beginnings of soft ball stage and using the snow to help form a taffy-like candy. It’s a total mess, not very Instagram worthy, making it a delightful treat to make with kiddos (use caution with the hot syrup!).
Print Recipe Pin Recipe
Prep Time 10 mins
Cook Time 5 mins
Total Time 15 mins
Course Snack
Cuisine American
Servings 1

This "recipe" is as easy as it gets, but you have to be very careful with the boiling maple syrup. It boils up quickly and high, and it can go from perfect to perfectly burnt in a hot second. Also, please use caution in handling your pan and transferring the syrup to a bowl. This is a fun treat to make with kids, but let the syrup cool before the little hands get near it. It will still work.
Keyword donuts, maple syrup, pickles, sugar on snow
Tried this recipe?Let me know what you think!
childhood memoriesdessertKane's Donutsmaple syrupNew HampshirepicklesRecipesugar on snowSunday Supperstiny kitchenurban kitchenWindswept Maples
0 Like
6 mins read
410 Views
Previous post