Among Zagreb’s many highlights, add museums to your list of must-dos. Two in particular have stood out to me for their poignant combination of humor and mourning: The Museum of Broken Relationships and the 80s Museum.

Museums that capture a very human mix of humor and mourning

To say that the twentieth century was unkind to this part of the world is an understatement, and, while people have moved on and times are decidedly better, there’s an unmissable layer of mourning just below the surface. There’s a scar, but the wound remains even as laughter returns. It’s a delicate walk, moving on. In their own way, these museums capture this conflict that lies at the heart of what it means to be human.

Both the Museum of Broken Relationships and the Zagreb 80s Museum are very small and can easily be done on a rainy afternoon. Even if you have glorious weather, however, don’t sleep on them. These museums offer more than originally meets the eye and are very much worthy of your time in Zagreb. 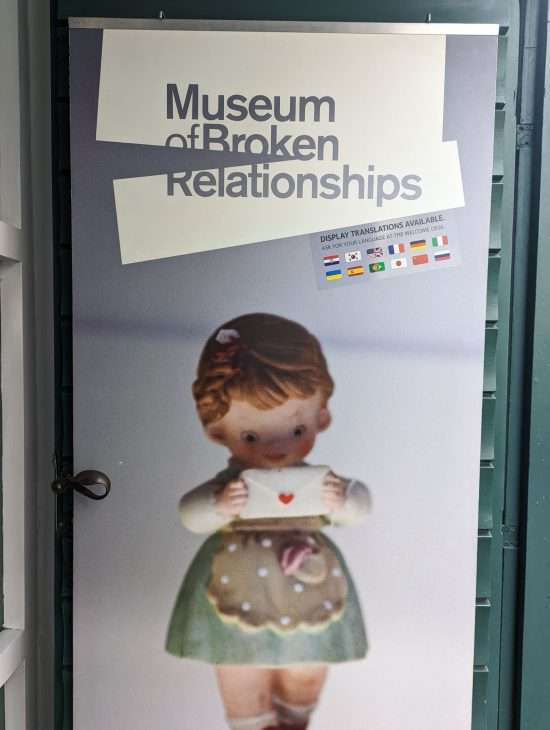 Do you have something from a former relationship, be it a partner, a friend, or a relative, that you can’t bring yourself to discard but that weighs you down? Maybe consider a donation to the Museum of Broken Relationships. Maybe it will make someone crack up in recognition. Or perhaps cry. It might speak for a small moment, or perhaps an entire era.

Donated objects of relationships past

The award-winning Museum of Broken Relationships has franchises in different parts of the world—LA has one in the US—but I don’t think that any of them could replicate the poignance of the original Zagreb Upper Town location in a Baroque Palace near St Mark’s Cathedral. Begun in 2006 by two artists, Olinka Vištica and Dražen Grubišić, as a way for people to release objects from old relationships that can’t be thrown away, the museum features donated artifacts of broken relationships. Items range from the cheeky box of pizza mix from a celiac patient to remnants of relationships forged or torn apart in war. 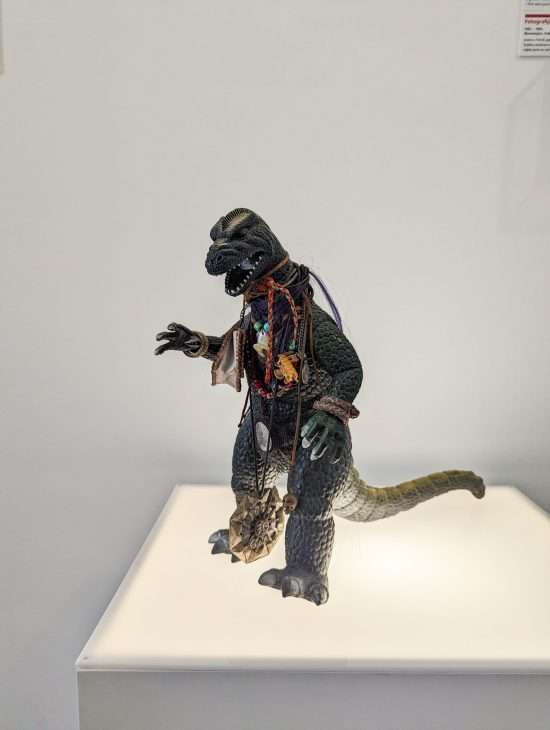 A handwritten letter from a lovesick teenager fleeing genocide to a girl in the next car over. A Godzilla statue with trinkets from girlfriends past.  Herpes cream. A stolen toaster. A video presentation of a misunderstood connection in World War II.

An early twentieth century pastel portrait by a woman who gave up her art, her religion, her identity, and her story in order to survive. A reel-to-reel recording of a dead father’s voice donated by a son whose mother refused to let him play the tape for fear that it would be ruined. Paper cranes created to mourn a lost pregnancy. The last New Yorker a couple received as a couple.

It’s all there, the funny, the mundane, the deeply personal, and the universal.

Release something of your own

In the room with some of the most moving exhibits, there’s a guest book where you can release something of your own, if you need to. After you go through the museum, have a coffee at the Broken Ships café (or something stronger, perhaps?).

To be honest, I wasn’t expecting to get as much out of this museum as I did. I sat in the café afterward with a cup of (excellent) coffee and have to say that I was grateful for a minute to write down my thoughts instead of making the awkward conversation of the couples sitting near me. I noticed that they’d switched to alcohol. 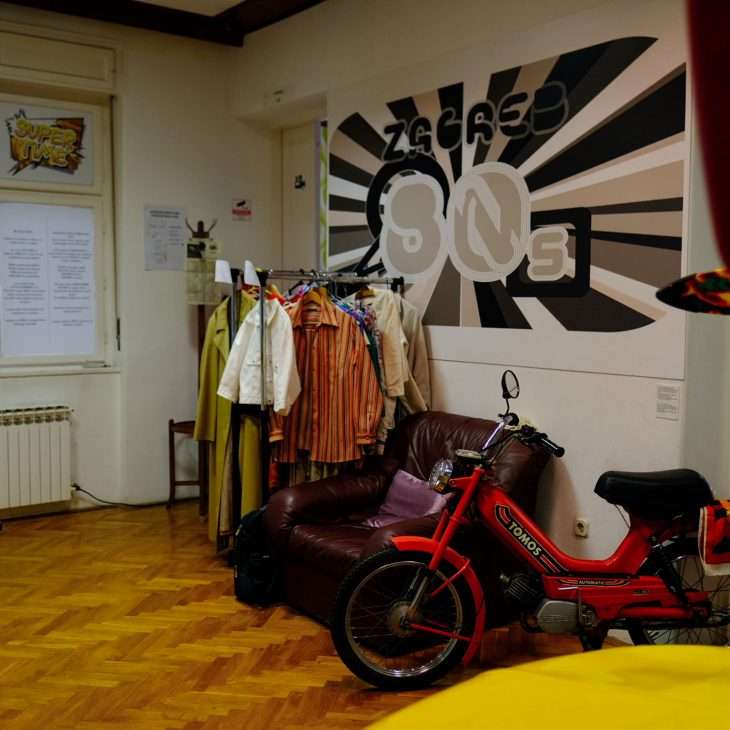 Set up as an interactive living museum of a typical 1980s middle-class/upper middle-class family in Yugoslavia, the Zagreb 80s Museum leans into the bonkers that was the 1980s. I’ve been to a museum somewhat like this, the Retro Design Center in Szentendre, but the 80s Museum is unique in its approach and its focus on the pivotal decade.

In the Zagreb 80s Museum, located just outside the Stone Gate in Upper Town, you can try on the clothes, sit on the furniture. Play the video games. Leaf through the books. Pretend to talk on the phone. “No guide, no fence, no velvet ropes, no glass” the 80s museum proclaims.

The soundtrack is pure 1980s, but the station is from Grand Theft Auto, so don’t be surprised if the DJ drops f-bombs or an advert for kids smoking cigarettes comes on (to be honest, they might have the latter here. This is one of the smokiest places I’ve ever been).

Walking around near a grandmother and her grandson

While I didn’t try anything on, I did check out the kitchen (there were actual vintage pickles in there!), picked up the phone, and leafed through what I can only imagine from the cover was a rather steamy romance magazine in the bedroom. A young boy played a video game, while his youngish grandmother looked wistfully at some of the items that clearly reminded her of her youth. 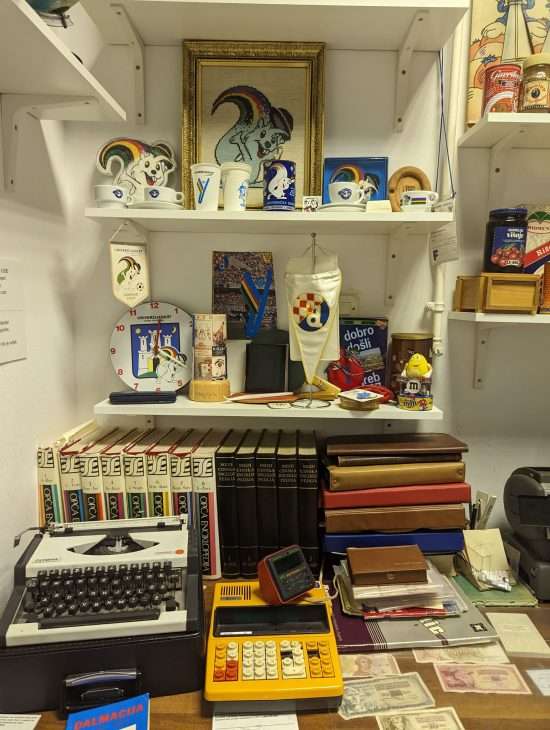 A proud moment for Zagreb . . . and a cute little squirrel

There was memorabilia from when Zagreb hosted the Universiade youth sport competition in 1987, an event, which, according to the description, helped to modernize Zagreb as a place where people would visit. Young people wanted peace. Pride in the event was evident, and the squirrel mascot Zagi is adorable and enduring local symbol of the event.

Garish technicolor glory with an undercurrent

The overall effect is garish Eastern Europe and 80s technicolor glory. You’d be forgiven for getting dizzy. In the midst of the bonkers, though, there’s an undercurrent. A pamphlet about preparing for a potential nuclear war whipped me back to my own childhood fears. I thought about which government the reader would fear. 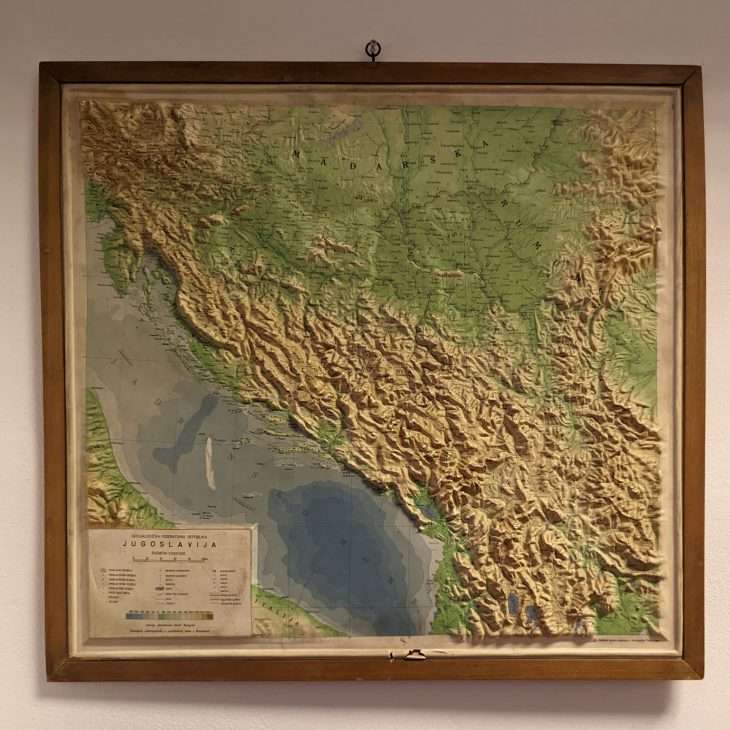 A foreshadowing of what’s to come

In the same study room as the sport memorabilia were maps of Yugoslavia and the countries united under its banner. With Tito’s death in the early 1980s, things had already begun to fall apart, but the inhabitants of this apartment, with their portrait of Tito hanging in the dining area, did not know what was coming.

Our knowledge of what comes next hangs over that apartment, a heaviness in the midst of all the tacky. We laugh, because it’s hilarious, and we look down, because it is so horrible.

Have you been to the Museum of Broken Relationships or the Zagreb 80s Museum?

What about you? Have you visited the Museum of Broken Relationships or the Zagreb 80s Museum? I’d love to hear your thoughts on them, or if there’s another Zagreb museum like this that I should visit before I leave at the end of the month. Please share in the comments below.

Follow along with my adventures in the Balkans and let me know what I can’t miss! And be sure to subscribe to get my weekly letter, where I share so much more! Sign up below!