Jump to Recipe Print Recipe
Posts on cooking and eating ranked near the top of the recent Wonder & Sundry survey, so, without further ado, here’s a post on one of my favorite back-pocket recipes, Julia Child’s pork chops. Surprisingly simple (and delicious), this was one of my first meat dishes after nearly two decades of vegetarianism. I walk past Julia Child’s Cambridge house most days.

Update, December 2021: Upon reflection, I have decided to include the recipe. I’ve tweaked the recipe over the years. It’s still very much Julia Child’s pork chop, but, as with all back-pocket recipes, it’s become my own, too.

The post also now has affiliate links, meaning that I receive a commission from qualified purchases (thank you!).

Julia Child and my mad crush on France

Julia Child’s Cambridge, Massachusetts, house lies not far from the grounds of the American Academy of Arts and Sciences, my local sanctuary. She lived across the street from e.e. Cumming’s residence, and just a couple of doors down from the William James house. A vegan lives there now, judging from the bumper stickers, and I wonder if that’s why her home bears no blue oval placard, which is how I know about the homes of e.e. cummings and William James.

I like to think of Julia Child as having had a mad crush on France, probably because I’ve also had a crush on France for most of my adult life. My crush, unlike Julia’s, is a bit ridiculous. My French sucks, even though I try. I’m not all that put together, and well … I ain’t thin. Also, when I developed this crush, I was a serious vegetarian, back before it was really a thing in France.

My first trip to France

How I Became a Not Vegetarian

While not a vegan (I tried for about six months but could not resist the pull of cheese), I did not eat meat for the better part of two decades (I had two exceptions, both after having been seriously ill and needing iron).

I didn’t cheat on being a vegetarian, even on my first trip to France. In 2004, I’d ridden with my dear friends I’d been visiting in the UK through the Chunnel, on a lark of a day trip to buy wine. After checking out Calais (and being amused by tacky France), We happened upon Boulogne-sur-Mer  on the 60th anniversary from its liberation from the Nazis. While the patisseries were fantastic, and I was so utterly charmed by my first steps on French soil, lunch was a bit awkward, cobbled together from appetizers and accompanied by quizzical glances from the server.

And so I remained a vegetarian for a few more years after that, until one day I wasn’t. I ate a piece of chicken one day in early 2009, for reasons that still baffle me. And it was really, really good. I knew right then that my life had changed.

Here’s a weird bit: my sister had also been a serious vegetarian for almost as long as I had been one. I messaged to tell her that I was no longer a vegetarian, as some kind of confessional. Her response, “Me too! I ATE A STEAK LAST WEEK!”  Cue the X-Files theme. 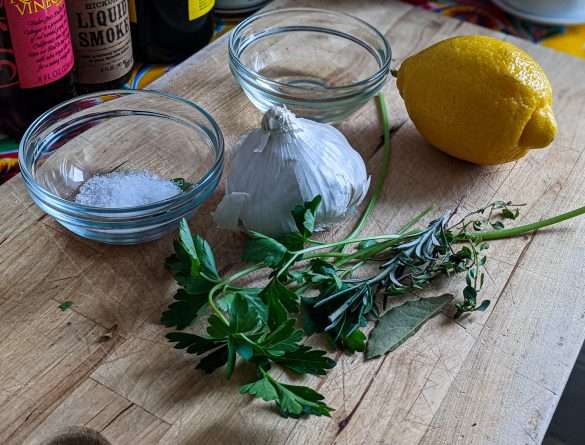 About ten seconds after I started eating meat again, I took my new carnivorous ways and bourgeoning cooking skills, as well as the time I had on my hands because I was a victim of the 2008 Great Recession, to try my hand at the more affordable recipes in Julia Child’s exquisite, Mastering the Art of French Cooking.

I tried the recipe for côtes de porc poêlées (casserole-sauteéd pork chops; page 386 in my well-worn edition) early on in my culinary adventures with Julia. Unlike other recipes, this one uses simple, inexpensive, ingredients that you likely already have on hand, and, provided that you can mix up the marinade in advance, cooks up easily on a weeknight.

I had not liked pork chops much as a kid, often finding them a bit dry. The recipe called for a marinade prior to cooking, and I made the marinade simple, or lemon and herb marinade, which promised to solve that problem. I remained skeptical, but still confident that Child would not steer me wrong.

A few hours later, I scraped off the marinade as best I could, and cooked the chops according to the recipe, browning first in oil, and then braising in butter, before making a white wine reduction sauce.

I plated my chops and sat down to eat, prepared to be a bit disappointed. I took a small bite.

I took another bite. YUM!

Not dry at all, these chops instead were winey, lemony, garlicky, and oh, so very, very delicious.

Tweaking a bit and making my own back-pocket recipe

I’ve made this recipe on repeat a couple times a month ever since, especially now that I work from home and can mix up the marinade during my lunchbreak. Once in a while, I try a different recipe, and I nearly always regret it.

As with all back-pocket recipes, after a while we experiment a bit and find something that works best for us. Me, I’ve added a bit more salt and more herbs to the marinade. I also tend to toss in the juiced lemon half, or, when I’m feeling more ambitious, some lemon zest. I enjoy the more intense lemon flavor this brings. But the method remains the same, and it works every time.

I highly recommend serving them with pomme de terre sauteés (sauteéd potatoes, another recent tweak I have made is cooking theses in duck fat), a simple vegetable, and a salad.

For a variation, you might try browning some mushrooms first, and adding them to the sauce while cooking and finishing off heat with a glug of cream. You can also use this recipe with country ribs—just be sure to marinade a bit longer and brown all sides before the braise.

A meat thermometer, like the DOT from Thermoworks (as recommended by Sam Sifton of New York Times Cooking) can help prevent your delicious chops from overcooking. A fat separator makes the saucing go faster. 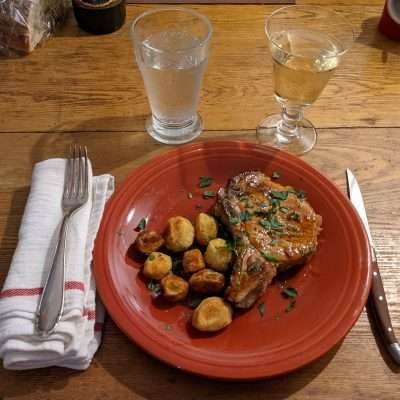 For the Pork Chops

Keyword Julia Child, pork chops
Tried this recipe?Let me know what you think!

What about you? What’s a back-pocket recipe of yours, and how did you come by it? Leave a note in the comments! And, be sure to subscribe below. Subscribers get access to the Wonder & Sundry Recipe Box, a weekly update from me, and other post-related goodies.

How Do You Focus on Your Big Questions?

Sundry Wonders from the Walking Week

A Kitchen Gift Guide for the Cooks in Your Life