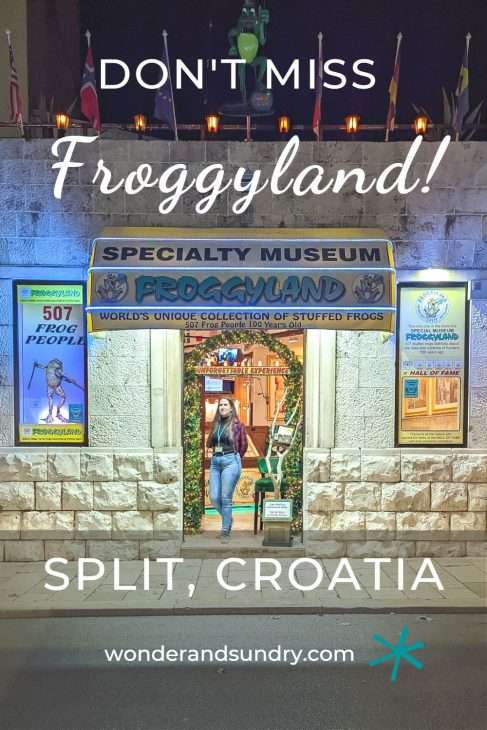 Exactly 507 century-old taxidermized frogs, posed as humans enacting scenes of life a century ago. Yes, frogs, or more precisely, “frog-people”. Froggyland is a delightfully wacky must museum when you’re in Split.

You HAVE to go to Froggyland when you’re in Split, Croatia

For Froggyland’s whimsy will delight even the most jaded of visitors. It’s just so wonderfully curious, and unlike anything else you’ll experience in Split, and, really, anywhere.

Plan Your Visit to Froggyland!

Croatia’s second-largest city inspires awe. From the Roman architectural splendor of Diocletian’s Palace, to the Riva where you can look out onto the Adriatic and watch the sun set, to twisting little neighborhoods where you can just get lost, and Marjan Hill where you can climb above it all, these are just a few of Split’s historic and natural treasures.

Everyone told me that I had to go to Froggyland

Lifelong residents of Split extolled the wonders of Froggyland to me (the advice was to go a bit tipsy). Fellow travelers told me that I would regret it for the rest of my life if I skipped it (“DON’T wait for a rainy day! Go NOW!”). And, as Froggyland itself tells you, “Froggyland and first love will never be forgotten.”

I mean, how are you going to forget exactly 507 century-old stuffed common European water frogs (think regular old green frogs), posed as people, re-enacting scenes of daily life from days gone by? These frogs are known as “frog-people” in Froggyland parlance. You’ll soon see why.

At Froggyland, you’ll behold so may bizarre scenes.

There’s more. Like frog-people in a crowded courtroom, and things are getting dicey.

Not quite following the advice of the locals who told me to imbibe heavily before heading to Froggyland, I nonetheless did visit one evening after my sunset drink on the Riva and before heading to dinner. Froggyland is located in Old Town, not far from the Golden Gate, so it didn’t involve walking more than a minute or two to get there.

I visited Froggyland on a weeknight later into shoulder season, so, while not empty, Froggyland was not crowded, either. This gave me ample opportunity to take it all in. I recommend finding a slower time, as the place is tiny.

Inside, you’ll find twenty-one old-timey glass diorama boxes that house each scene, and the staff encourage you to read the captions (in Croatian and English) and to make sure that you take the time to notice the details in each scene. Laughter rewards the patient viewer. I suppose that’s the third rule of Froggyland.

You’ll likely learn, “What the …” in several languages as you walk up and down the small exhibition hall. I went beyond giggling to guffawing at certain points—the frog song soundtrack; the randomness of seeing frogs in the scenes; and just the thought that I was in Split, Croatia, at that very moment, looking at hundreds of frog-people acting like old-fashioned humans. What a thing to experience.

The taxidermy on display at Froggyland is a masterwork

Did I mention that the skill that went into this display of bizarre taxidermy is truly impressive? This isn’t some Crappy-Taxidermy exhibition. No, a true master created the exhibits in Froggyland. I mean, I’m no expert on taxidermy, but these frog-people look fantastic for their age.

Ferenc Mere (1878–1947), a Hungarian taxidermist, apparently spent a decade of his life in the early twentieth century collecting common European water frogs frog specimens, stuffing them using a rather demanding process, and making his exhibits. While reaching the heights of whimsy, Mere also reached the heights of his craft. His skill and output make Froggyland’s collection of stuffed frogs the largest in the world, according to Froggyland’s website.

The attention to detail is amazing

The frogs are painstakingly posed, and not only that, the props are intricate as well. The little house with the frog maiden being serenaded has these adorable little curtains and fence. The young frog-pupils are reading books with writing on them and sitting at cute little desks.

It does make one wonder why someone with such talent and skill would spend so much of their life making frog-people dioramas, but perhaps we should just be grateful.

From a Serbian attic to Froggyland

That these dioramas survived to delight us at Froggyland is another thing for which we should be grateful. They were found in an attic in Serbia some fifty years ago by the current owner, Ivan Medvesek’s, parents.

According to this NPR story, the parents made a traveling museum before opening up Froggyland in Split. The story also distressingly suggests that Froggyland might be sold to people in the US, citing a drop off in visitors during the pandemic. Hopefully with more people traveling again, the numbers will continue to climb back up, because this place is a treasure exactly where it is. That would be my rule for Froggyland.

Have you been to Froggyland?

Have you been to Froggyland? Did you go after reading this post? I’d love to hear what you thought. Let us know in the comments below!

*You can purchase postcards at Froggyland, which I highly recommend.

Plan your visit to Froggyland!

Visiting Froggyland is easy, but these tips might help you enjoy yourself more.

If you haven’t yet subscribed, do so today so that you’ll be the first to know when my upcoming guide to Split goes live! You get lots of other goodies, too. Sign up below!

What a Week: Snow Days

How to Open a Pomegranate without Destroying Your Kitchen