Tis the season for Zagreb’s Christmas Market, Advent Zagreb. If you love European Christmas markets, add Advent Zagreb to your Nice list. With practically the whole city involved, you’ll not only get into the Christmas spirit, but you’ll also get a lovely tour of graceful Zagreb. As this event takes place all over Zagreb, you’ll need a good map, and this post has an annotated map to help you get the most out of Advent Zagreb!

Think of Croatia, and you’ll likely see visions of sparkling beaches and summer days, not a fairytale Christmas market. Dear Reader, you would be wrong. Advent Zagreb, Zagreb’s Christmas market transforms the entire city into a winter wonderland. From late November until early January, Zagreb sparkles with holiday lights, smells of mulled wine (kuhano vino), and tastes like fritule (donuts).

Skate in the Ice Park, “fool around” (eat, drink, and be merry) in the Fuliranje, shop for handmade souvenirs in picturesque Zrinjevac park, head underground for a polar vision in Grič tunnel, and have a mulled wine with a view on the Gradec Plateau. There’s even an amusement park in Tuđmana park!

Advent Zagreb is magic, and you simply have to experience it.

Advent Zagreb helped me choose Zagreb as a destination in Croatia

When I was picking my destinations in Croatia for my most recent Balkans adventure, Zagreb went to the top of the list in November in no small part because I would get to go to the opening of Advent Zagreb. I’ve never been to a European Christmas market before, and the fact that Zagreb’s Christmas market had won the best Christmas market in Europe three years in a row (2016, 2017, 2018) was certainly a big draw. For the last two years, the market was subdued both by the pandemic and the aftermath of the 2020 earthquake, but this year it’s back, and it’s a fairytale wonderland.

I most certainly was not disappointed, and I found myself instantly imbued with holiday spirit. The mulled wine may have helped. 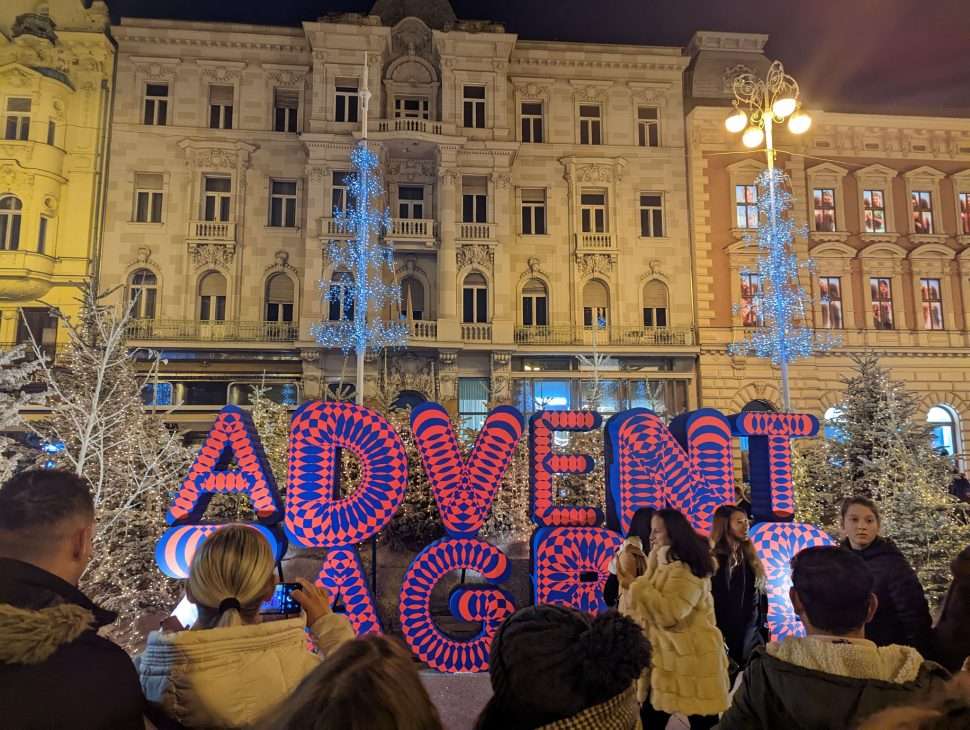 Advent Zagreb gives you a great tour of Zagreb

Rather than confining itself to one area, Advent Zagreb spreads throughout the city, and so wandering about to the different areas gives you a great tour of the Zagreb. A city made for walking, you’ll love strolling through the parks and shops, but if you get tired, the outstanding public transit system will get you where you need to go quickly and efficiently (not to mention cheaply). Ride the funicular to take you from the Lower Town festivities up to Gradec for a nostalgic treat!

Best of all, while activities and food cost money, Advent Zagreb is free for the wandering.

Use the annotated map to help you navigate Advent Zagreb

As Advent Zagreb spreads festive cheer all around the city, you might have a hard time finding where you want to go. I didn’t find an easy map to help me get where I wanted to go, so I’ve created an annotated map for you below.

Below were some of my favorite Advent Zagreb areas and moments. I’ve roughly divided them by major neighborhood and then listed them in alphabetical order. Consult the map for locations to help you plan your trip. Note that the map contains more locations than are detailed in the post.

Let us know your favorite Advent Zagreb highlights in the comments!

Advent Zagreb kicks off in Zagreb’s Ban Jelačić Square with the lighting of the first advent candle. The square lights up with a giant Christmas tree, photo spots, craft and food stalls, and the advent wreath in the Manduševac fountain. Head over to nearby European Square when you’re hungry for sausages, fritule (donuts), or other tasty delights.

Eat, drink, and be merry at the Fooling Around spots (Fuliranje)! Merriment is a grand Advent Zagreb tradition, and you’ll take it all in here. Fooling Around in Strossmayer Square attracts a young, raucous crowd, with the Esplanade Hotel offering dancing and a more sophisticated (yet still very much a party) holiday vibe.

Generally, the food here is the best, with chefs from around Zagreb and Croatia hosting stalls. Bar stands get mobbed as the night goes on. Even if partying isn’t your thing, I’d plan on having lunch and/or dinner at one of the locations.

I was due to head back to the States and didn’t want to do it with broken bones, but dang, if the Ice Park didn’t look like a blast. King Tomislav Square should be on your sightseeing list regardless, but it’s absolutely magic when transformed into Advent Zagreb’s Ice Park. You can rent skates and get on the ice for a Christmas song, so unless you are a chicken like me, get on out there!

If skating isn’t your thing, you can watch from the sidelines and enjoy the music before heading off to one of the Fooling Around spots close by. I seem to have taken way more video of this than snapshots, so check out the video for more Ice Park fun. 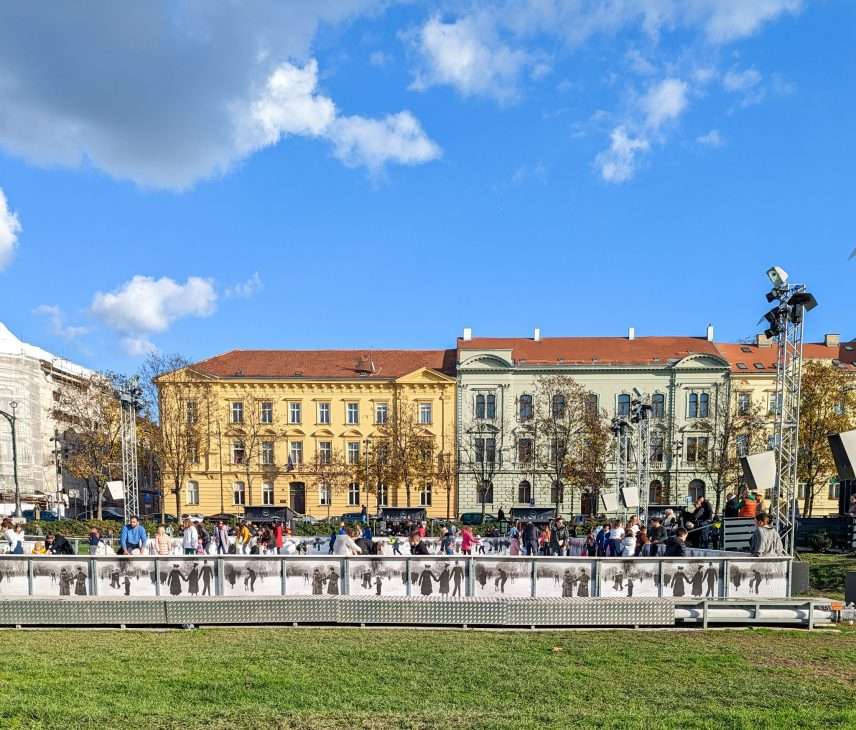 Head on over to the little amusement park for a ride on the Zagreb Eye and more (you may wish to take a tram, as it is a walk from the other Lower Town attractions, or include this as part of your Upper Town excursion). 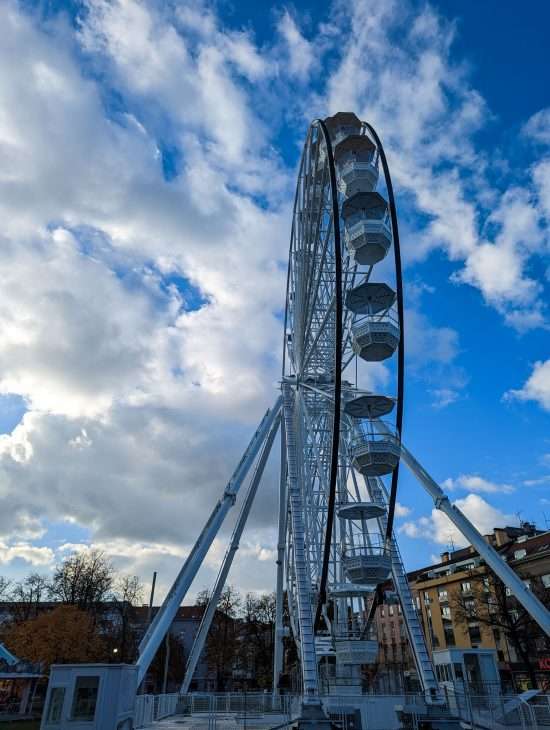 Get your nostalgia on in Upper Town! Grab the Funicular and land right in the heart of the Old Town Advent Zagreb festivities. Old-fashioned photo ops, music, huts, and lights make the season bright. Grab a drink at one of the stalls of Advent Caffe de Matoš and take in the views of Lower Town.

I’m biased, because this wasn’t far from where I was staying, but this was my favorite Advent Zagreb spot. Baš naš translates as just us, and I think the spot may have been intended for a date night type thing, but it was a party when I was there. It had the festive and fun atmosphere of the Fooling Around, but without the huge crowds and general raucousness. Plus, a view of the Zagreb Cathedral that you just can’t beat. If only the food were as good as the Fooling Around (it’s not even close), then I would consider it the perfect Advent Zagreb location. While the food is not as good, the kuhano vino (mulled wine) is. Grab yourself a cup, squeeze into a spot, preferably in view of the Cathedral at sunset, and let the holiday spirit wash over you.

Come the holiday season, this WWII era nuclear bunker turned 1990s rave spot turned public art space running under Gradec, transforms into a winter fantasy that’s definitely worth a stroll through. Do note that for the duration of Advent Zagreb, Grič Tunnel is restricted to one way, with entrance at Mesniča Ulica. Other access points are blocked. If you were visiting Park Grič, you could just walk down the hill and enter the tunnel from there, exiting on Radićeva Ulica, not far from Ban Jelačić Square. 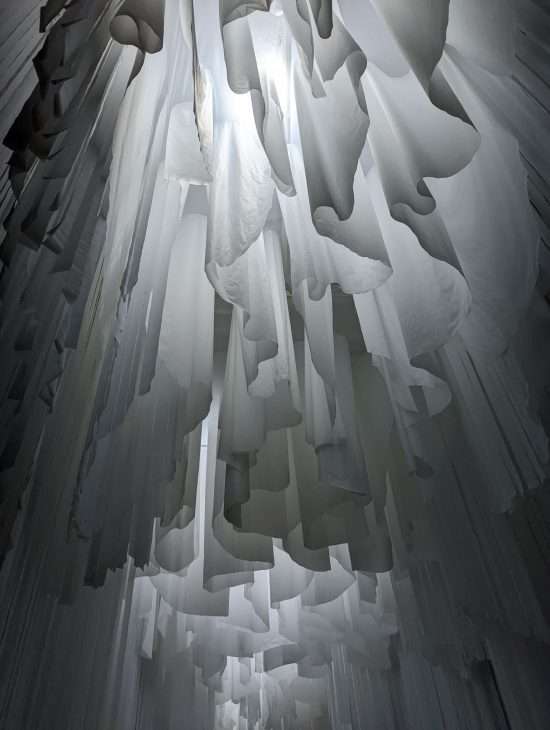 When the hubbub of Advent Zagreb gets to be too much, make your way to historic Park Grič for soft golden lights and soothing music. Snap a photo under the archway, sit on a bench and relax. If you wanted to see the exhibit in Grič Tunnel, you could simply head down the hill to Mesniča Ulica. 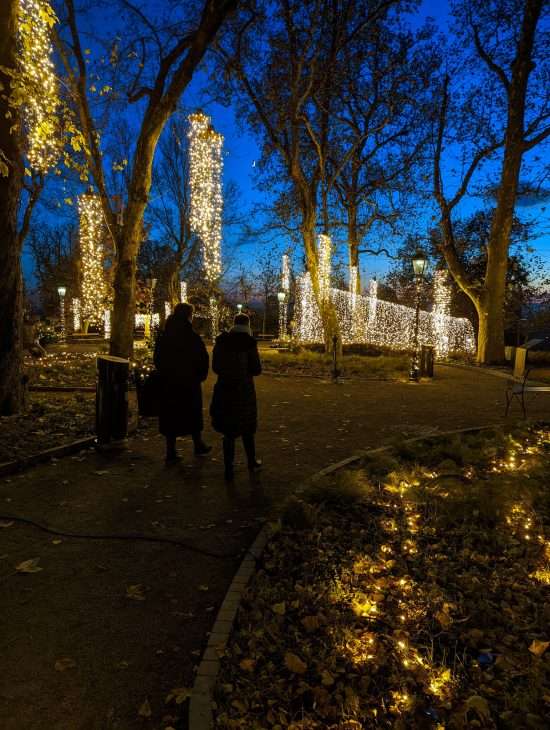 Plan your trip to Advent Zagreb!

Many of Advent Zagreb’s locations remain consistent from year to year. This post is based on my experience at Advent Zagreb in November 2022.  I’ll keep this updated with major changes.

Advent Zagreb is generally accessible, though alternate routes to some of it might be required. Rides generally would not be.  I could not find detailed information on this, other than that Zagreb has in general worked on accessibility in recent years.

Use the map below to find out more information about Advent Zagreb. To navigate to a particular area, simply click on the Directions link in the listing.

PSA: Croatia Joins the Schengen Zone and Adopts Euro January 2023—What It Means For You

Kuhano Vino: Get in the Holiday Spirit with Croatian Mulled Wine